I’ve actually had people ask me:

“Is there really any Gold left after the Gold rush of 1849?”

Wow! Yes, there is a lot more gold left!
Perhaps as much as 80% still remains, yet to be found by people like you.
Imagine the amazing adventures you’ll have hunting for and finding native gold…

In fact far more gold is being mined today than a century ago. It’s not usually just sitting there like it was for Mr Marshall at Sutter’s mill, but a big rain storm will introduce and concentrate new gold pay-streaks for you to find

This graph shows several things about world gold production. First it has periodic cycles about every 33 years between max gold production peaks and a moderate (21%) decline for about 7 years. Then it continues to climb decade after decade, so obviously there’s still a lot more gold out there being discovered year after year. 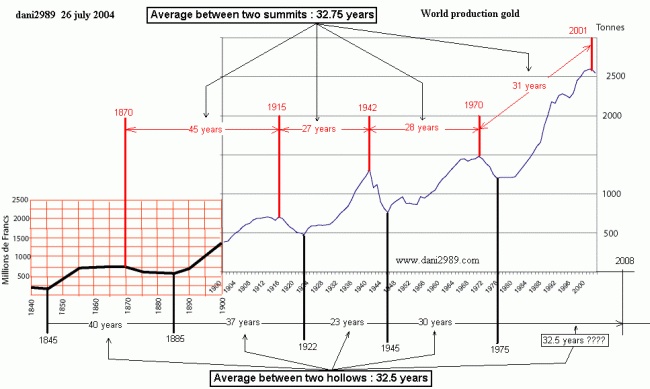 Notice that the volume of Gold being recovered never declines more than about 21% below the previous maximum. Also, keep in mind for the prospector that gold prices will follow supply & demand effects based on demand and gold production.

So, we can expect to see prices climb after a peak in production is reached (eg. Latest world annual peak of ~2600 tons about 2001.)

Take all this with a grain of salt (price wise) since world economies & debts play a big role in pricing too.

Let me know what you think in the comments below.

This site uses Akismet to reduce spam. Learn how your comment data is processed.