Have you heard of gold sniffing dogs?

While out prospecting for gold one hot day I was watching our cattle dog rowdy play with the kids. He was diving to the bottom of a pool of water and fetching rocks. Right when I thought he was going to get hit by a big heavy 3 incher, I saw something else… 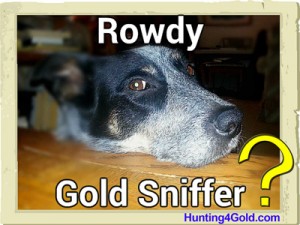 While I was watching my kids send our dog Rowdy to the bottom of this 5 foot deep swimming hole  again and again, something caught my eye.  I noticed that Rowdy was picking up the same rock over and over!  No, this wasn’t just any rock that looked like the one that the kids tossed in the pool.  It was the same rock!

Rowdy had repeatedly found the same cobble among tens of thousands similar to it on the bottom of the pool.  This was a 3 inch diameter cobble that looked like so many of the others below.  This rock was heavy and looked like a nice piece of quartz gold ore.  How could he find that specimen underwater?

Could he be trained to find gold & related sulphides like gold sniffing dogs are?

How could rowdy find a rock, the same rock, at the bottom of five feet water over and over

Then it hit me, maybe he smells the rock like he smells a chew toy on land.  I know he has great sense of sight but nothing like his sense of smell.  He can smell his toys at 100 yards (wind permitting) and find a small ball hidden deep in brush in a matter of seconds.  Over and over again.

That got me to thinking.  What if I could train rowdy smell the sulfide ores that surround gold and point to that gold? So I set out to research gold sniffing dogs.

Then Rowdy one of the gold sniffing dogs!  Olfactory metal detector…

That’s a pretty exciting thought, so I set out to think about how to train him and ran into the following cool book on gold locating dog training.

What would you do with your gold sniffing dog?    Let me hear in your comments below.

Rowdy one of thegold sniffing dogs in action:

This site uses Akismet to reduce spam. Learn how your comment data is processed.